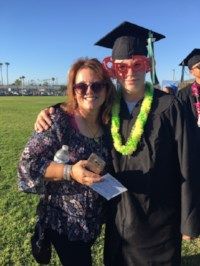 Dana Ray began her journey in October of 2010. Since then, Dana has been involved in virtually all aspects of her youth’s life, including educational success, preserving important relationships and being a support as the minor transitions into early adulthood. We would like to take you back to how Dana described the afternoon she first met with her CASA youth, Jason.

“Wow, I must say that today was a success! Jason is fantastic, and clearly very excited to 'finally' get a CASA. He asked me if I could work on getting his friends a CASA, because he could tell they were sad that they didn't get one today! I told him I would let the office know that there are more boys who would like to have their own CASA. He took me to two more houses after you left and introduced me to the staff and some of the other boys. He then walked me back to the main office, and then gave me a big hug when I left. I told him I would see him next week, so he is looking forward to that!

I loved the environment there at the (placement removed). Clearly they really love those boys and for that I am grateful!”

Over the years Dana’s youth was presented with all of the traditional challenges of being in foster care. Despite the ups and downs, Dana forged partnerships with the eleven CFS social workers that were assigned to him, dozens of teachers and counselors and has devoted over 750 volunteer hours towards her youth’s case. Additionally, Dana became Jason’s Educational Advocate in April of 2014. As a result of Dana’s advocacy and mentorship Jason graduated in June of 2017 (see photo attached.) I truly believe that if I were to ask Jason to recall some of the best days of his life I’m sure Dana’s name would come up. Likewise, Dana was present for some of the toughest as well.

Dana serves as an irreplaceable source of information for Jason. Dana has compiled a photobook of Jason’s childhood starting at 11 years old which she will give him on his 18th birthday. Dana has capitalized her role as an advocate to the court by religiously accompanying her youth to his Dependency Court hearings. Dana relentlessly looks out for the best interest of her youth and is not afraid to voice her opinion when necessary.

With Dana’s help, Jason was able to keep the few key people in his life close to him. Jason was allowed to remain connected with a previous group home staff member through a recommendation in one of Dana’s CASA reports to Dependency court. As Dana got to know Jason she discovered that he had an older sister who was adopted. At the time, this was one of the few familial connections Dana was aware about. It was of the upmost importance to Jason that he remained connected even though his sister was part of another family. Dana was crucial in helping Jason remain connected as she provided transportation for Jason and consistently communicated with the adoptive sister’s mother to ensure visitation plans were kept. Dana never allowed geographical distance to become a wedge between her and her youth. Dana was only 25 miles when she first Jason; Over 100 miles separate Dana from her youth now and she remains committed as ever.

Dana exemplifies and propels CASA of San Bernardino’s mission forward by improving the quality of life for youth in foster care.